It’s been just about a week since we returned from our trip to Panama, and my husband and I are still pretty excited about it.  Even though we were only there for four nights, it was a great little trip for us to get some sun and take a breather from “real life.”  We had a fantastic time, but I do need to preface this post by saying that I would not recommend Bocas del Toro, Panama for a honeymoon… quite yet.  Maybe check back with me in 5-10 years or so.  The area is gaining lots of popularity with tourists, but it doesn’t currently have the element of travel luxury that most honeymooners would want.  In other words, it’s full of backpackers and baby boomer expats.  That being said, many travel writers have claimed that Panama is “the next Costa Rica” so I have high hopes that Panama will be a great honeymoon destination in the near future.  But for those of you who are interested in taking a non-honeymoon trip that isn’t incredibly mainstream yet, Panama would work well for you.

A couple of things to mention straight off the bat: the U.S. dollar is their main currency but they do have their own coins, only tourists wear Panama Hats (and they are actually from Ecuador, not Panama), and despite what our tour guide told us, there ARE earthquakes in Panama because a 5.6 one woke us up one night.

We took a red-eye flight from LA, and woke up in Panama City six hours later.  Since we had a seven hour layover there and wanted to see as much of the city as possible, we made arrangements in advance to have a private tour through My Friend Mario.  “Mario 2” picked us up from the airport (he claimed that all of their guides are named Mario) and took us everywhere: the Old Panama Ruins, the new city, the colonial area, the fish market ($3 ceviche – YUM!), the Coastway, the fruit market, Ancon Hill, and finally to the Panama Canal.  Although that sounds like a lot to do after a red-eye, the city isn’t too spread out and it was great to be chauffeured around in an air conditioned car. 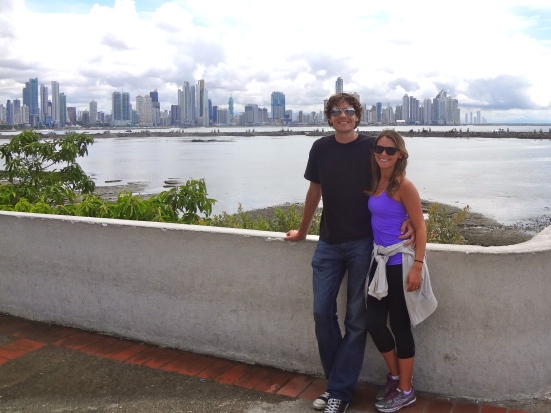 After that whirlwind tour of Panama City, we took a quick 45 minute flight to Bocas del Toro and then a two minute water taxi to our hotel on Isla Careneros.  (Pro tip: if you go to Bocas del Toro, water taxis between Bocas Town and Isla Careneros are $1 per person.   Don’t ask how much, just give them the money.  If you ask, they’ll charge you 5x more.)  Despite being only $60 a night, our hotel was highly rated on Tripadvisor so we gave it a shot.

It was extremely clean and in a great location, but it was pretty basic accommodations – like I said, definitely not honeymoon material.  The owner Jose and his girlfriend Mayra didn’t speak great English (and our Spanish is pretty terrible), but they were extremely friendly and helped us plan out the three full days we had in Bocas.  Looking back on it, I would recommend the same itinerary to anyone, so here it is:

Day 1: Sleep in, take a water taxi to Bocas Town, then catch the noon bus to Boca del Drago.  You can also rent bikes and ride there from Bocas Town, but our hotel owner talked us out of it.  Later on when we met a Danish guy who rode his bicycle to Bocas from LOS ANGELES (!!!!), we felt like the laziest people alive since we thought riding bikes across one little island would be too tough.  Anyway, from Boca del Drago you can take a beautiful walk 20 minute walk or take a water taxi to Playa Estrella – a beach area that’s full of massive red and orange starfish.  (Pro tip: don’t go barefoot – there’s something in the sand over there that feels like sharp little glass splinters.  My feet felt better by the end of the day though, and Aaron didn’t feel anything at all because his feet are basically two massive callouses.)  When you get back to town, go back to Isla Careneros to freshen up and get dinner at Bibi’s on the Beach to watch the manta rays swim in the water beneath you.  Before you go to sleep, ask your hotel owner to book “the boat tour” for the next day.

Checking out the starfish at Playa Estrella on Isla Colon

Day 2: The boat tour!  This was definitely a highlight of the trip.  We were picked up at our hotel around 9:30 am and were returned around 8 hours later.  For about $30 per person, you will get to see Dolphin’s Bay (yes, with real dolphins), snorkel around Cayo Coral, relax on the gorgeous beach of Cayo Zapatilla, and get more sun on Red Frog Beach.  Bring snacks and drinks if you can because the place where they take you for lunch is totally overpriced.  For dinner, try Raw Sushi + Martini Bar in Bocas town and make sure to get their amazing ceviche.

Hanging out at Red Frog Beach on Isla Bastimentos

Day 3: Sleep in again and take a walk around Isla Careneros to check out some of the beaches near Bibi’s.  The locals on the island are quite poor, but we always felt welcomed and safe, even at night.  Then take a water taxi back to Bocas Town and grab lunch at Bocas Blended – a “food truck” of sorts that has tons of healthy salads, wraps, and smoothies.  From there you can either hire a taxi or rent ATVs to explore the beaches on the eastern side of Isla Colon.  ATVs for a half day cost around $50, and they don’t like to haggle.  Since the weather was a little iffy for us on this third day, we opted for a taxi instead.  It should cost around $25 for a round-trip excursion to Playa Punch (very popular with surfers) and Playa Bluff (huge golden beach).  For dinner, you absolutely need to go to El Ultimo Refugio in Bocas Town.  We actually went there on both our first and last nights because we liked it so much, but just a heads up that they are closed on weekends. 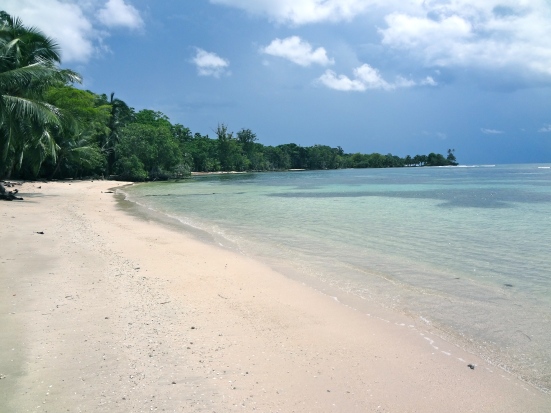 The nightly menu at El Ultimo Refugio on Isla Colon

What NOT to bring:

If you go to Panama with an open mind, I think you’re certain to have a pretty great time.  Please feel free to contact me if you have any questions or concerns about planning a trip of your own!