Ah, Salvador. Despite what you may hear about the city in terms of safety, we had an awesome experience in Salvador and it ended up being one of our absolute favorite destinations in South America. If you’re going to Brazil, do yourself a favor and spend a few days soaking in the culture of Salvador! The excerpt from Aaron’s 2009 email is below:

Q:  Let´s start at the beginning.  You guys got off the beaches and got cultural this week.  When we left off, you were about to get on the midnight bus to Salvador.  Take it from there.

A:  The midnight bus to Salvador was the best of our many overnight trips, thanks to some coma-inducing cough syrup we picked up in Macéio.  The world looks better when you sleep.  Upon arriving at our hostel, we met Russell, the owner, who would prove to be, without a doubt, the most informative and helpful person in all of South America.  Within an hour of meeting him, we had carefully labeled maps of all important parts of the city, a list of good nearby restaurants, and a pretty much complete schedule for our three days in Salvador.  Also, he had a beagle named Snoopy.  And the hostel offered one free caipirinha per day.  We loved Russell, and everything about that hostel. 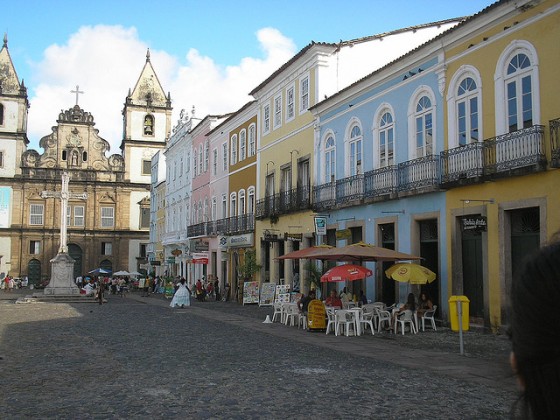 We also met a fascinating cast of characters at the hostel, and soon we were doing almost everything together.  They included a nineteen-year-old guy from New Zealand currently living in Buenos Aires (bear in mind that at nineteen I don´t think I could cross the street without adult supervision), a guy from Rhode Island in the process of moving to Salvador to work on his Ph.D dissertation in Ethnomusicology, and two girls from Boise, Idaho, one of whom had a job selling plants which apparently allowed her to work three months out of the year and take the rest of the year off, the other an artist who worked mostly in the medium of teapots, her most famous work being titled “Sneaky Jesus.”

A:  Apparently this was a teapot sculpted to look like a statue of Jesus, and in said statue He is trying to conceal the fact that he is eating a hot dog.  The inscription on the inside of the pot reads “Hey now, is that kosher?”

And again, this is a teapot.

After meeting these two (the plant seller also seemed to know quite a bit about the Boise break-dancing scene), I am now convinced that Idaho is the most creative, independent-thinking place on Earth.  Also, the Boise State football field is blue.  Go Broncos!

Q:  And with this crew, you explored basically the whole of Salvador, or at least all the places Russell said you should go.  What kind of city is Salvador?

A:  I guess the key adjective is “Afro-Brazilian.”  Salvador was the first part of Brazil discovered by Europeans, so it became the first capitol and also the main slave trading port.  Without reading like an encyclopedia entry on Brazil, here are a few of the cool historical things we checked out: 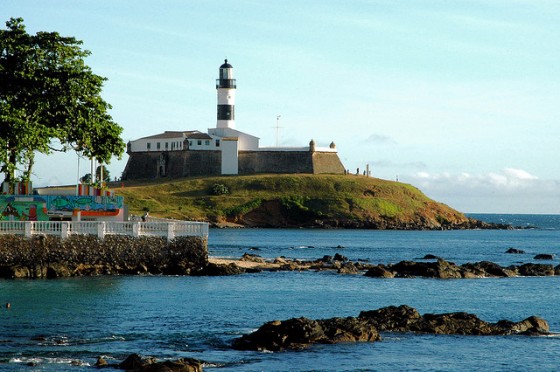 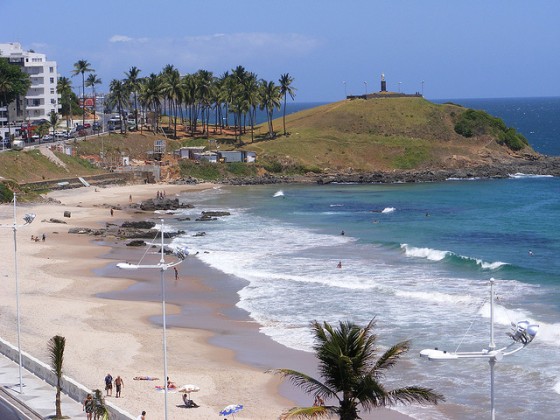 Q:  And, at one point, did you see a guy light himself on fire?

A:  Yup.  The coolest cultural thing we did was attending a traditional dance show, which was so much fun that it gets its own paragraph.  Normally, “traditional dance show” would sound kind of lame, but we´ve learned that the prefix “Afro” makes everything cool.  It started out with a lot of trancelike shaking and yelling, which was interesting just for how weird it was, but then a guy came out dancing with bowls of fire in his hands, and another balanced on his head, while we sat in the front row of the crowd, close enough to feel the heat.  He then proceeded to reach into the bowl, grab the substance that was on fire, and rub it all over his body.  He also put it in his mouth.  Seriously, I have no idea how he is still alive.

The show then moved into a demonstration of capoeira.  Now, even though capoiera is decently well-known (in fact, at least on person on this email list has taken capoiera lessons in San Francisco), I´m still going to talk about it at some length because I´m fascinated by it.  Capoiera started out as a traditional form of martial arts in Africa, but it was banned by the slave owners in Brazil.  The slaves still wanted to do it, but they knew that if they hit each other in combat, it would leave marks, and the slave masters would know they had been practicing capoeira.  So they kept everything the same, except they eliminated all touching.  So they still kick each other in the face, but train their feet to stop millimeters before impact.

Think about how much trust that requires:  “I´m going to come at you, and I want you to come as close as you possibly can to kicking me in the face, knowing that if your foot does accidentally make contact, my master may kill me.”  Now that is intense.

Anyway, the show was incredible.

Q:  So … no beach time in Salvador?  Did Ilana go into withdrawals?

A:  Slow down there … I didn´t say NO beach time.  I just said that we started mixing in non-beach things.  We still stayed in the beach district of town (Barra) and had to take a bus to the old city (Pelourino) for all of our cultural adventures.  In fact, the first thing we did in Salvador was head for the beach, where we watched surfers tackle the biggest waves we´d seen yet in South America, huge barrels that broke insanely close to the rocks.  This would not be another installment in the Aaron Attempts to Surf Series.

We also took a full-day schooner tour of nearby islands, which obviously involved a good amount of beach time.  It also involved:

Q:  I knew you guys couldn´t stray too far from the beach.  The real story in Salvador, though, was the old city.  Tell us some more stories about it, your interactions with it, the current state of race relations, and possibly how the local homeless perceive American politics.

A:  Kind of a strange request, but okay.  Here are some capsule summaries:

5 Cent Elevator – The city of Salvador is built on a hilltop, with a steep cliff separating it from the harbor.  To remedy this, in the 1830s, the city built a roughly 4-5 story elevator to connect the two.  Still in use today (though modernized), it apparently still costs the same as it did back then, 5 cents Brazilian (roughly 2 cents American).  Pretty steep cost, I know, but who wants to take the stairs?

Political Salesmanship – Many of the homeless in Salvador sell these little ribbons that apparently have some kind of religious significance.  After I refused one such salesman, he started yelling, “Discrimination! Discrimination!  George Bush!  George Bush!”  At first, I thought he was comparing ME to Bush because of my obvious racism, which would have been kind of astute for a Brazilian homeless guy, but then he started yelling, “I love Bush!” and “F*** Bush!” indiscriminately, and I realized that this was probably (1) all the English he knew, and (2) a fairly clever ploy, since most Americans would react to one of those two statements.  Still, I did not buy a ribbon.

Enthusiastic Cabbies – After the dance show, five of us jumped in a cab heading back to the hostel, and the laughing cab driver apparently decided that the presence of white people in his cab meant that he did not have to obey traffic laws.  He ran red lights and cut off everyone in his path, all the while with his head out the window yelling, “Cinco Gringos!  I have cinco Gringos!”  Anyway, fun ride.

Racist Souvenirs –  Can you buy black Sambo-looking rag dolls?  Yes.  Can you buy paintings of a black guy lounging on the porch with a caption reading, “No money, no job, no worries?  Sure.  Can you buy a shirt reading “100% NEGRO”?  Absolutely.  As to who actually buys these things, I have no idea.

Colonial architecture in the historic centre

Q:  And the food in Salvador?

A:  Well, first and foremost, I finally found the holy grail of a rodizio pizza place, with the added bonus that it came with all-you-can-eat ice cream (including strange flavors like “Croissant,” which actually wasn´t bad).  All of this for seven dollars.  My stomach is stretching just thinking about it.

Ilana´s food highlight was definitely the muquequa, a local seafood stew in portions so big you have to have at least three people to order it.

Both of us were more quizzical when it came to Salvador´s main street food, the acaraje, a (supposedly) 2000 calorie ball of fried bean dough, pepper paste, and shrimp.  Not … undelicious, but somewhat underwhelming.

On the beach, the go-to snack is small blocks of cheese roasted over a small fire like marshmallows until golden brown, occasionally served with a honey/syrup-like dipping sauce.  I have eaten roughly as much fried cheese and food on sticks here as one would during an average visit to the Minnesota State Fair. 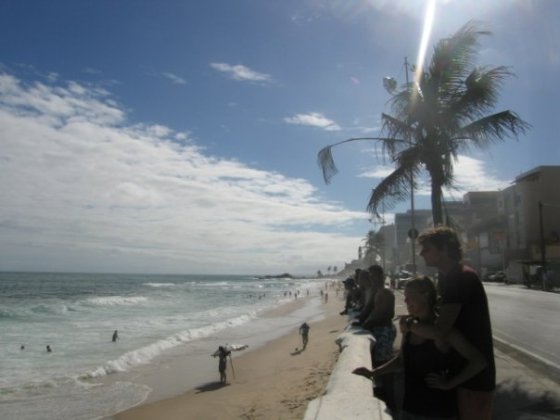 Aaron and me in Salvador

Q:  While we´re on the subject of food, would you like to talk about another of Ilana´s recently revealed quirks?

A:  Ilana LOVES wandering around foreign supermarkets.  Loves it.  Even if we don´t necessarily need to buy any food.  She is enthralled.  Also, Salvadoran supermarkets marked a high point for Brazil´s national pastime of standing in lines.  Whenever we entered a supermarket, I would immediately go stand in the shortest express lane while Ilana did all of the shopping.  By the time she brought all the food to me, I was occasionally more than halfway to the front of the line, but never much more than that.

Q:  Now that you´ve left the city, what is your biggest unsolved mystery regarding Salvador?

A:  Twice, on the bus, we passed the biggest hospital in the city.  Both times, there was a huge crowd gathered outside a locked gate.  TV cameras, satellite trucks, the whole works.  What was going on?  Celebrity mother?  Recovering football star?  Weird, unnatural genetic mutations?  We´ll never know.

Next up: not one but TWO final Fond Memories of Brazil posts about Rio de Janeiro and Buzios!