Wow, it’s been awhile since I’ve had the chance to work on a non-Real Honeymoon blog post!  We were in Europe for 11 days, and then I spent the past week getting caught up on work and everything we got behind on while we were out of town.  The trip was pretty excellent though, and I would highly recommend both Scotland and Ireland to anyone who’s considering a visit.  It was especially fun to visit both countries in June because it stays light out for so long.  The sun sets around 10:30 pm, which meant we could sleep in late guilt-free and still have plenty of daylight for sightseeing. 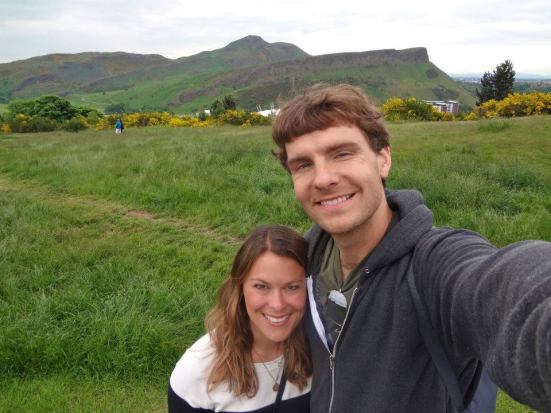 In front of Arthur’s Seat in Edinburgh

Although Scotland and Ireland are seemingly similar in landscape and culture, I’m going to recap our trip in two separate blog posts because it’s too difficult to lump both destinations together.  As this one’s title suggests, it’s all about our time in Scotland!

So how did we decide on Scotland in the first place?  Our friends were getting married in Ireland, and since I’d been there before we knew that we wanted to go somewhere else, and we didn’t want to travel too far between the two places.  We narrowed down the options to Iceland, Portugal, and Scotland.  We ruled out Iceland once we found out that there are currently no direct flights between Reykjavík and Dublin.  Then a friend happened to mention to us that Bruce Springsteen was going to be on a European tour this summer.  Intrigued, we immediately looked up his schedule, and wouldn’t you know it Bruce had a show in Glasgow a few nights before the wedding.  At first I was a bit disappointed about missing the beaches in Portugal, but once we started talking about going to Panama over Memorial Day Weekend I got really excited for Scotland.

A look up at Edinburgh Castle

We had four nights to spend in Scotland, and we chose to do three of them in Edinburgh and just one night in Glasgow.  The two cities are just an hour apart by train.  In Edinburgh we stayed at Angels Share Hotel, a boutique hotel with a nice restaurant and hip bar.  The location was perfect – just a short walk to pub hopping on Rose Street, shopping on George Street, and all things touristy on The Royal Mile. 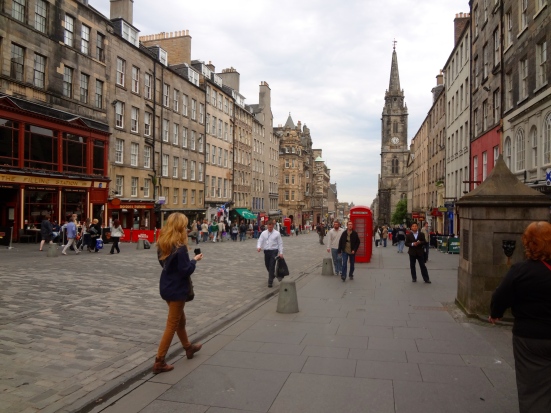 Here are some of our favorite bits from Edinburgh:

The beach in North Berwick

While people are likely to describe Edinburgh as “charming,” I think that the word that best describes Glasgow is “cool.”  Or as my husband puts it, Edinburgh is a bit like Scottish Disneyland, whereas Glasgow is where actual people live.  Although it may appear a bit rougher around the edges, we really enjoyed our one day in Glasgow, and not just because of the Bruce Springsteen concert!  But since he was in town, many of the city’s hotels were either sold out or were way out of our price range, so we ended up renting a room in the West End through AirBnb.

Although we didn’t get the chance to check out the University of Glasgow and the Botanic Gardens like we wanted to, we still really enjoyed the following: 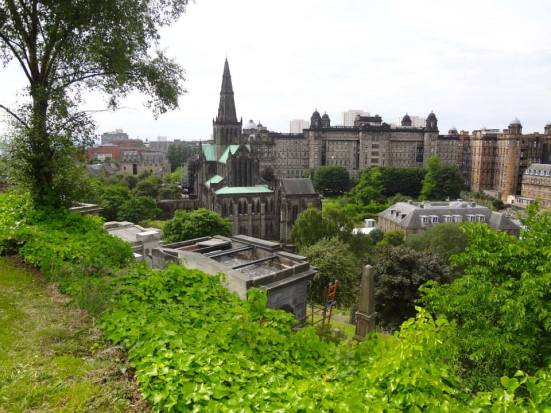 View of the Glasgow Cathedral from the Necropolis

We hope that we can visit Glasgow again someday, and hopefully see much more of Scotland.  Come back soon for another “recap” blog post about our six days in Ireland.