A couple of days after their beautiful wedding in San Francisco, my good friends Alix and Brandon left for their equally gorgeous honeymoon in Tahiti.  And as if they truly planned it this way, they returned to San Francisco just in time to watch the Giants win the World Series!  Sounds like the best month ever to me.  Check out their incredible Tahitian honeymoon below:

Tahiti, October 2012. One week in Moorea, one week in Bora Bora. 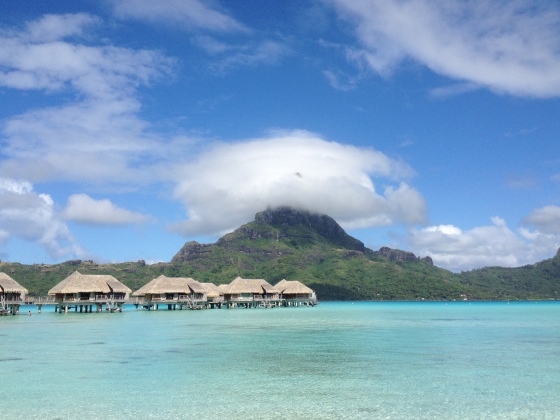 We had a really hard time deciding. We were torn between a backpackery type trip and going somewhere cultural versus somewhere where we could just plop on a beach and do nothing. We debated Tahiti, Fiji, Madagascar, Philippines and all over Europe (especially Greece and Italy). But ultimately, the weather decided our location. Getting married in October didn’t leave us with very many warm weather options (unless we wanted to risk typhoons). I had been to Greece and had always pictured honeymooning there (beautiful beaches, culture, activities etc.). And Brandon had been to Italy and really wanted to go there (wine tasting, site seeing etc.). But the weather in both places was going to be cold. Madagascar was REALLY far and there were possible issues with weather, and in the Philippines we risked typhoons. When it finally came down to it, we realized that all we wanted was warm weather and to sit on the beach and drink rum. Tahiti was a sure-thing for the nice weather and the decision was made.

Sitting on the beach, massages, the blue water, drinking rum, and having nothing to do all day, for days on end. We did a few excursions (jet skiing, ATV tour, day trip on a boat). But mostly, all we did was read books and relax on the beach.

As perfect as it was, there were a few things that we could have done differently. We would have brought a few more liters of rum (because you really can’t have too much rum when you are living in paradise), and some more snacks to save money. As amazing as our hotels were–and they were truly amazing–we wish we saw a little more of the islands. Moorea is absolutely beautiful; it is lush, mountainous, and has a local feel that Bora Bora doesn’t have. It would have been fun to spend a little more time seeing the island. That said, Bora Bora is a wonderful place, and there is nothing you could do to improve it.

Finally, a recommendation to all you book lovers out there, go light.  Brandon made the mistake of reading Atlas Shrugged during our honeymoon, and as much as he loved the book, it did not make for the best beach banter. Bring novels and magazines that will not lead you to contemplate the role of selfishness and individuality in a society that is on the verge of economic collapse.

We hired a travel agent, which I would 100% recommend (depending on where you are going). It was so nice not having to spend time figuring out where to go, and how to get to each place etc. Because we had a travel agent, we didn’t have to do much planning ourselves.

Basically the whole thing! Tahiti is on the Tahitian Franc so everything is REALLY expensive. Also, we stayed at two really nice hotels and we stayed in really nice hotel rooms at each place. On Moorea, we stayed at the Sofitel in a bungalow on the beach and in Bora Bora we stayed at the Intercontinental Thalasso in an overwater bungalow. We also treated ourselves to massages at each place and really nice dinners. One thing we did to try to offset the overall cost was that we knew we would want to drink a lot when we were there so we bought a few liters of rum at duty-free in the US, so were able to save a ton of money on drinks because we just bought some fruit juice and would make our own drinks on the beach.

After two weeks of pampering, the thought of flying coach was simply too much to bear, so we upgraded to business class for our flight home. We are still paying it off, but it was well worth it.