My husband and I spent last weekend eating, walking, and (at least for Aaron) running through Austin, Texas. It was my third visit to Texas’ capitol but Aaron’s first, so we wanted to make sure that we hit the city’s best highlights during our short stay.

We didn’t do a lot of planning in advance for this trip; just some “Best Austin BBQ” Google searches and one Facebook post:

We received tons of great recommendations from friends who recently visited on lived in Austin, so we consolidated those notes and made a tentative game-plan. While we are in no way claiming to be Austin experts, below is a list of the places we checked out and would recommend to other visitors.

– We arrived in Austin around 9:30 pm and asked our taxi driver to make a pit stop at Torchy’s Tacos on our way downtown. Even though one friend told us to skip tacos altogether and just focus on BBQ while in Austin, that friend was DEAD WRONG because Torchy’s tacos are not to be missed. They have an excellent secret menu, too.

– Once we had secured our tacos, we checked into InterContinental Stephen F. Austin. The hotel was in a perfect location for the Austin Marathon (our whole reason for this particular Austin visit), but the downsides were the extra charge for in-room wifi and the lack of an outdoor pool.*

– We wanted to start the day with a breakfast for champions: the “Don Juan” breakfast taco from Juan in a Million. Holy moly that thing was good, and just one of them can easily feed two people. (Pro tip: ask for extra tortillas.) Don’t be discouraged by the crowd waiting outside the restaurant; the line moved quite quickly and we were seated in under 15 minutes. 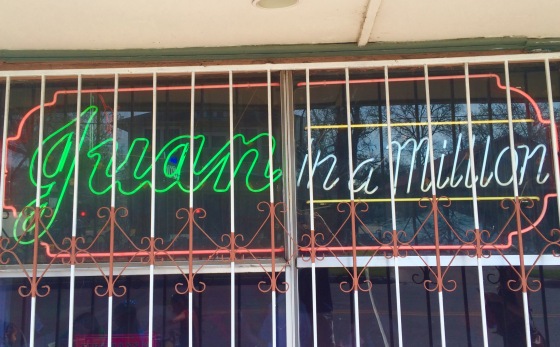 – After breakfast we took a cab to the South Congress neighborhood (ask to get dropped off at Doc’s then walk south.) We grabbed iced coffees at Jo’s then wandered around the eclectic shops. It was especially fun ducking into Allens Boots and ByGeorge — those two stores couldn’t have been more different, but both were awesome! Our only regret was being too full from breakfast to try any of the cafes or bars in the neighborhood.

Had too much fun at Allens Boots. They even had U of M ones!

– The marathon expo was on our way back downtown, so by the time we walked over there and got Aaron checked in he had worked up enough of an appetite to justify a root beer float from Sandy’s. The perfect treat on a hot day.

– We lucked out with gorgeous weather, so we walked all the way through downtown to the Capitol Building, then continued north to check out the University of Texas at Austin campus. I love seeing new college campuses, but man they can make you feel old! Also, it didn’t feel right being surrounded by so much burnt orange. 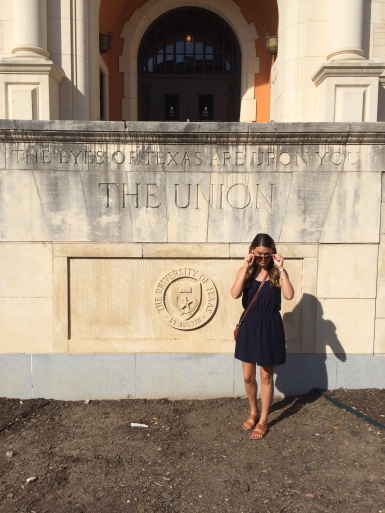 My best “Eyes of Texas” impression

– From campus we took a taxi back downtown so we could walk through 6th Street before the evening’s debauchery began. We walked through the Red River district over to Rainey Street which used to be one of my favorite spots in town. Now, sadly, there are new condo buildings being constructed all around the quaint old houses and food trucks, killing the easy-going vibe. Nevertheless we still enjoyed a beer and some snacks at the Banger’s beer garden.

– After Rainey Street we made our first bad decision of the trip: BBQ at Stubb’s. Fine music venue, not great BBQ.

– By this time in the evening our tootsies were getting pretty tired (and by “our” I mean “mine” – Aaron runs marathons, after all) so we took a taxi over to Waterloo Records where people still shop for music (gasp!). Cool store though, and definitely worth checking out if you want to browse the vinyl section. 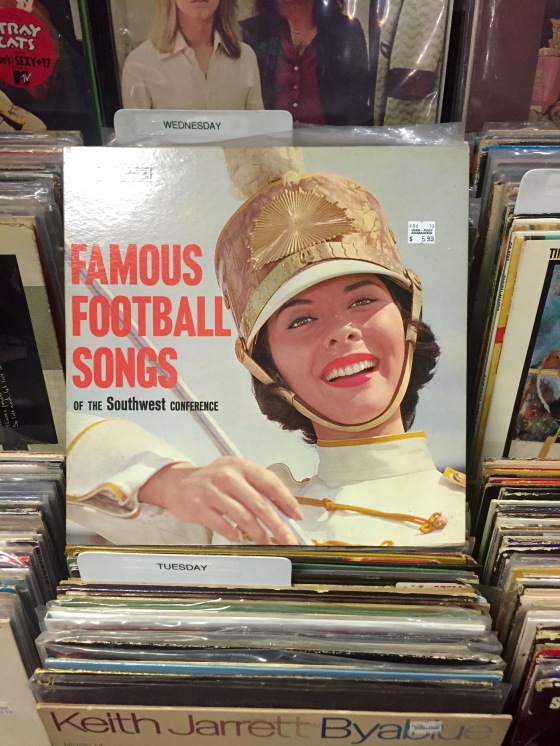 Toto, we’re not at Amoeba anymore

– I was hoping that I’d be hungry enough for one last snack/meal, but I tapped out before we could try our last destination of the day: Valentina’s Tex Mex BBQ food trailer (located behind Star Bar). Aaron got a KILLER brisket sandwich, but I just watched him eat it because I was too full from everything else.

– Once Aaron showered and recovered, we walked over to Easy Tiger for coffee and a pre-BBQ pastry. Cool place though, wish we could’ve stayed longer and played ping pong.

– Then we walked over to La Barbecue and stood in line for 45 minutes. Since we were the official “last in line” cut-off people, we were given a sweet sign and some samples. It. Was. Amazing. And then we left because we didn’t want to wait there all day. Next time I’ll remind Aaron to run way faster so we could get there earlier.

– Instead, we took a taxi to Terry Black’s Barbecue on the recommendation of a driver who said we wouldn’t have to wait in a long line. We don’t know a lot about BBQ, but this Californian/Minnesotan couple gives it two thumbs up! You scoop your own sides (cafeteria style), then you tell them how much meat you want (by weight). I liked it because I could avoid Texas-sized portions, and Aaron thought the chopped beef sandwich was the best thing he ate all weekend.

Just a portion of Aaron’s lunch

– And before we knew it, it was time to head back to the airport. But on the way there we stopped for some more Torchy’s Tacos and Holy Cacao cakeballs that we enjoyed once we got back to San Francisco.

Like moths to a flame, we just couldn’t stay away

It sure was a gluttonous weekend (for me, at least), but one that was well worth it. I’m glad I finally got to see the non-bachelorette party side of Austin, and I’d love to go back again soon.

*If you want to stay downtown in a hotel with an outdoor pool, check out the W Austin or the Hilton Austin.