Friends of last week’s couple who went on a honeymoon in Paris and the Maldives, Katie and Christopher also went on an incredible honeymoon recently. In search of delicious food and gorgeous beaches, they decided to split their time between Hong Kong and three different places in Thailand. Read all about their amazing multi-moon below:

We left bright and early Sunday, June 15th [2014], the morning after our wedding. We flew to Hong Kong where we spent a few days sightseeing, eating, and generally just enjoying the amazing city. From Hong Kong we flew to Chiang Rai, Thailand where we stayed at the Four Seasons Tented Camp. After a few days in Northern Thailand, we went to Bangkok for a couple of days and then to the lovely island of Koh Samui for five nights of relaxation. We ended the honeymoon with one more night in Hong Kong.

Katie and Christopher at Camp Peak 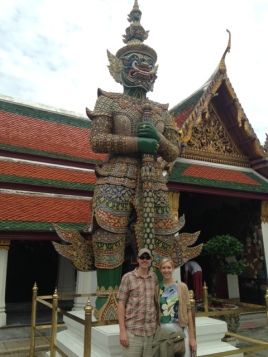 My husband Christopher picked our destination and did a large part of the planning (with a little help from a travel agent). Thailand has always been one of the top destinations on our travel bucket list and it seemed to have the perfect mix of everything we wanted for a honeymoon: adventure, wildlife, and beautiful beaches. We paid for flights with miles so it worked out best to fly in and out of Hong Kong, which turned out to be one of our favorite cities. 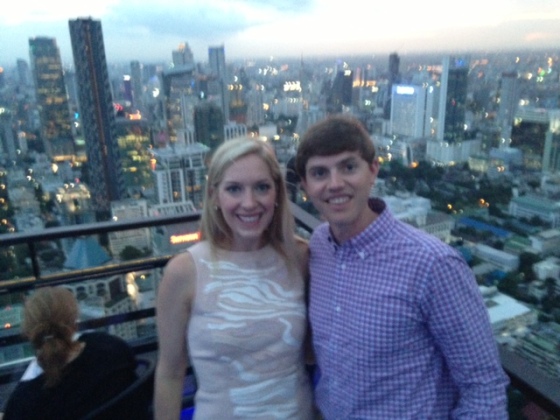 The Four Seasons Tented Camp Golden Triangle is heaven on earth and was by far our favorite part of the trip. We stayed in our own “tent” which was the most luxurious accommodation I’ve ever set foot in. It overlooked a beautiful river, low mountains, and all the wildlife you could take in.

The resort also partners with an elephant reserve where they rescue elephants and take care of them in their day-to-day life. We were able to feed the elephants every morning and even got to ride and help bathe them. They are such amazing and gentle creatures, and being so close to them was a once in a lifetime experience.

On top of the amazing scenery and wildlife, was the incredible food. Our first night there, we were served a traditional Thai meal and it was some of the best food I’ve ever eaten. I will forever dream of the food at this resort. 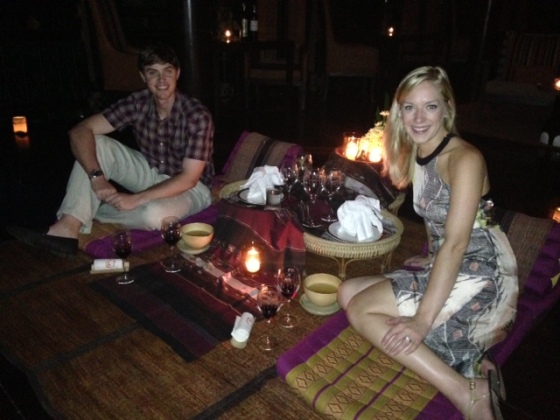 Perhaps where we stayed in Koh Samui. We stayed on the northern tip of the island which was beautiful and secluded but the airport was only a few miles away so the planes flying in and out would go directly over our resort. The resort was amazing and well worth this small hiccup but I would be interested in seeing some of the other resorts. Also, Koh Samui the island was a little more developed and crowded than we had expected, although apparently significantly less so than Phuket. For a truly “remote” experience, we probably would have chosen a different beach destination. All of that being said, it was still an incredible island with beautiful views.

View from the deck at Six Senses, Koh Samui

I’m a planner so I did LOTS of research before our trip. Christopher did most of the general planning (picking locations, hotels, flights, etc.), but I did a lot of research on the specifics of each city (restaurants, activities, etc.). I made must do/see lists for each city and we just checked things off as we went. We never had a set itinerary so we could do as little or as much as we wanted each day which was perfect. 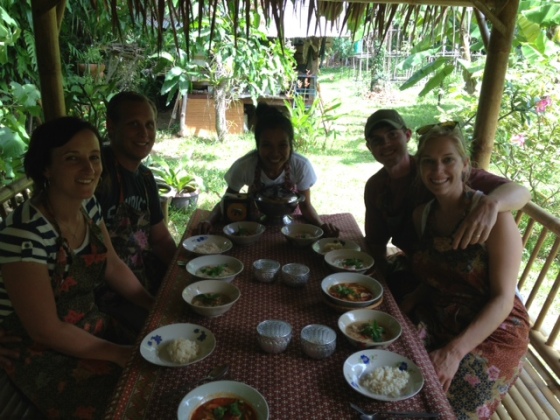 Our biggest splurge was staying at the Four Season Tented Camp Golden Triangle… Did I mention that it is heaven on earth!? Other than that, we splurged on food (both monetarily and in calories) everywhere we went. We ate at an amazing sushi restaurant in Hong Kong called Sushi Sase where we ate the freshest fish I’ve ever had. In Bangkok we ate at Nahm (currently the number one restaurant in Asia), and had what Christopher described as “the best meal I’ve ever eaten.” And one night in Koh Samui, we ate at a seafood restaurant on the beach where I had a HUGE lobster cooked in Massaman curry that was incredible, although that was an accidental splurge because we misread the price on the menu (oops!).

Drinks at Aqua in Hong Kong 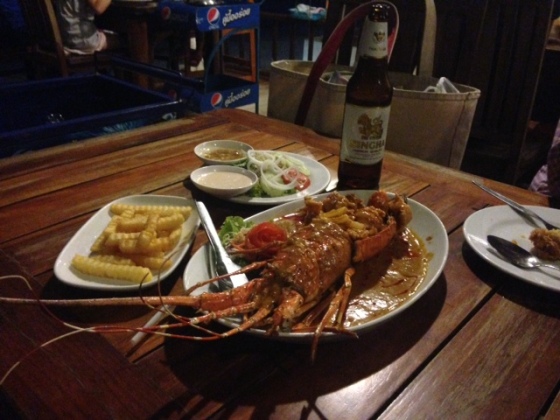 The “accidental” splurge: lobster in curry

Do I have to just pick one!?! There are so many places I want to go but South Africa is probably on the top of my list.