College sweethearts and fellow Michigan Wolverines Megan and Mike didn’t want to choose between Hawaiian islands, so they decided to go to two!  Read all about their fun and adventurous Hawaiian honeymoon below:

Hawaii in the beginning of September (2011) – Kauai (Grand Hyatt in Poipu) and Maui (Hyatt Regency in Lahaina).

We wanted somewhere warm and tropical, where we could relax AND be adventurous.  We knew we would be exhausted and need lots of pool and cocktails, but we also knew we would get restless if we couldn’t get out and explore.  We also didn’t want to sacrifice too much time and budget of the vacation traveling, since we were already flying from Northern Michigan back to LA.  We decided on two islands because we don’t get to travel very often, and we wanted to make the most of the time off.  We chose Kauai based on recommendations from friends.  It sounded more quiet, so we started our trip there to unwind after the wedding.  We chose Maui as the second island b/c there were so many “adventures” we read about (volcano and watefalls!).

Watching Michigan beat ND under the lights…jokes (but it was an added bonus)!  This is actually really hard to answer because we got to do so many amazing things.  I loved the day we spent in Waimea Canyon in Kauai because we were both totally in our element together.  We found ourselves alone on most of the trails, we went off roading in our jeep wrangler (a must on both islands!), and just enjoyed some spectacular views.  I also loved our day on the Road to Hana.  Nothing is more Hawaii then swimming in a waterfall.

The day we spent on the Road to Hana in Maui.  It was an epic adventure, but there are two things I would have changed.  1) I would have charged our camera before we went or even brought a waterproof disposable for all the waterfall photos and 2) I would have bought water shoes for all the slippery rock climbing in the water fall lagoons.  In Kauai, I also wish I would have known to get into Waimea Canyon Park early and up to the Napali Coast viewpoint at the top before the clouds roll in.  We were lucky and got a quick sneak peak, but the longer you wait the less likely the view gets.

I always have ambitious goals to plan out our whole vacation ahead of time.  I buy the various guide books, but then I never actually end up reading them until we are on vacation.  I’d say the real extent of my planning was asking around for recommendations on key sites/excursions.  We knew we wanted to go hiking in Kauai and we wanted to do the sunset tour on the Haleakala Volcano and the Road to Hana in Maui.  Other than that, we pretty much just read up on the guidebook as we went. 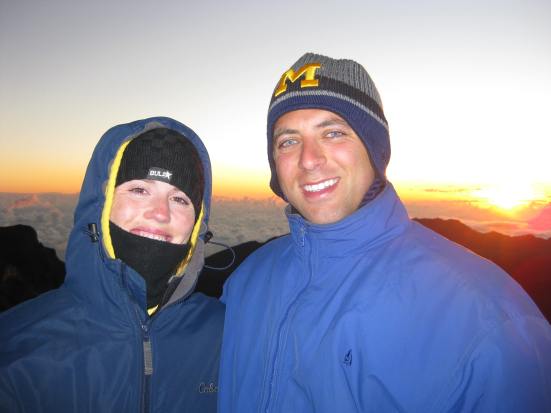 A spa day at the Grand Hyatt in Kauai.  We went all out with a couples package that included a lemon shower scrub, rose petal infused soak, and massage.  The entire spa experience was outside in our own private spa bungalow, surrounded by the “jungle”.  We also partially splurged on a helicopter ride.  We got 1 passenger voucher from Costco from a family friend as a wedding gift, so we bought the 2nd passenger ticket.  It was a helicopter ride from Maui to Molokai.  It is definitely the best way to see Hawaii, and it didn’t hurt that the helicopter pilot played the Jurassic Park theme song as we flew over the cliffs and waterfalls.

Ughhh the constant debate.  I think we are going to try to either do Greece/Croatia or Ireland/Scotland.  I also really want to go to Costa Rica and Iceland!