You know in the movies when a bride and groom leave their wedding in a decorated car that says “Just Married” and then they drive off to the airport? 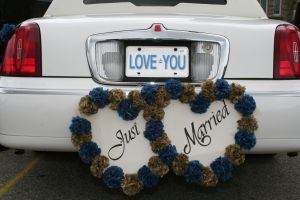 Yeah… no one I know has ever done that.  With popular day-after brunches and just having tons of friends and family around that you rarely get to see, I think that most couples delay their honeymoon departures for a day or two.  For various reasons, some couples even postpone their honeymoons for several months or even years.  If you need help deciding whether to leave right away or push it back, here are some things you’ll want to consider:

If your wedding is in July and you’ve always dreamed of a honeymoon in Australia, you probably shouldn’t leave on your honeymoon right away.  Since the seasons are opposite in the southern hemisphere, July is the dead of winter in Australia.  Other similar examples include going Italy in August (all of the locals go on holiday then, so you’ll be stuck with tourists only), the Caribbean in September (hurricane season), and anywhere September – November (Michigan football season… just kidding… but not really).

It’s important to consider whether you and your fiancé will be able to take off as much time from work as you’d like.  Okay, maybe you’d like to take off several months, but let’s try to be realistic here.  I’m just saying that if you just started a new job and only feel comfortable taking off one week now, but you’ll be more comfortable asking for two weeks off in six months, maybe you should wait.

3.  How do you want other people to treat your honeymoon?

People often report that their employers “respect” the honeymoon if it’s directly after a wedding, whereas they feel like they’ll be treated differently if they take 2+ weeks off from work a few months later.  If you don’t want coworkers giving you the stinkeye and receiving tons of work emails while you’re away, try to leave on the honeymoon sooner rather than later.

This is probably the most important factor, and the biggest bummer to think about.  Weddings are expensive, you guys.  Like really, really expensive.  Sometimes it’s difficult to not only come up with the funds for your dream honeymoon right after the wedding, but also to be able to relax and actually enjoy yourself after spending so much money.  This will totally boil down to your personality, so just remember to be honest with yourself.  If you think you’ll be doing mental calculations throughout your honeymoon about how much each mai-tai is costing you, perhaps you should wait and save up before the honeymoon.

The bottom line is that there’s no clear right or wrong time to go on your honeymoon.  I’ve even had a friend who went on her African safari honeymoon a few weeks before her wedding.  It all boils down to when you and your fiancé have the time and the money to go and truly enjoy yourselves.  Just make sure that you think things through before booking your reservations.